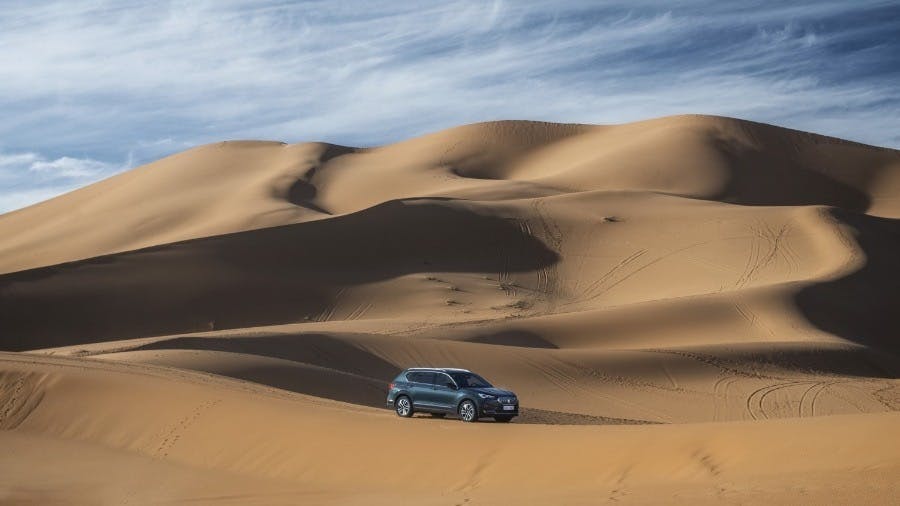 The SEAT Tarraco undergoes testing on Morocco’s Erg Chebbi, one of the most unforgiving places on the planet
Dunes that soar to the height of the Sagrada Familia challenge driving assistants such as the DCC adaptive chassis control and the 4Drive all-wheel drive
Temperatures ranging from 0 to 50 degrees and varying terrain raise major driving difficulties

A dune field measuring 22 kilometres long and 5 kilometres wide, featuring mountains of sand, varying terrain and extreme temperatures. This is the challenge facing the SEAT Tarraco in Morocco’s largest desert.

SEAT is the only company that designs, develops, manufactures and markets cars in Spain. A member of the Volkswagen Group, the multinational has its headquarters in Martorell (Barcelona), exporting 80% of its vehicles, and is present in over 80 countries on all five continents. In 2018, SEAT sold 517,600 cars, the highest amount in the brand’s 68 years of history.

The SEAT Group employs more than 15,000 professionals and has three production centres – Barcelona, El Prat de Llobregat and Martorell, where it manufactures the highly successful Ibiza, Arona and Leon. Additionally, the company produces the Ateca in the Czech Republic, the Tarraco in Germany, the Alhambra in Portugal and the Mii in Slovakia.

The multinational has a Technical Centre, which operates as a knowledge hub that brings together 1,000 engineers who are focussed on developing innovation for Spain’s largest industrial investor in R&D. SEAT already features the latest connectivity technology in its vehicle range and is currently engaged in the company’s global digitalisation process to promote the mobility of the future.